Bang On! are an energetic junk percussion duo who use a giant homemade drum kit to create funky beats and rhythmic treats, whilst putting on an outstanding visual display of technique and showmanship.

Bang On! have been performing worldwide since 2002 and have a varied CV to show for it. Most recently in 2014 the duo were out in Mumbai, India, running workshops at the American School of Bombay. Previously to that, notable gigs include touring Europe with the Dresden Dolls in 2006, having a sell-out show at the Edinburgh Fringe Festival in 2007, touring Taiwan twice in 2002 and 2011 and reaching the semi-finals of Britain's Got Talent in 2008 - there's more on this below!

In 2012 Bang On! took some time out as both Katie and Dave performed as individual drummers in the Olympics Opening Ceremony. This was an amazing experience that couldn't be missed as the pair got to be in the centre of the stadium for most of the ceremony.

In 2008 Bang On! reached the semi-finals of ITV's Britain's Got Talent, impressing Simon Cowell who said they were "Brilliant Percussionists".

During the build up to the semi-finals Bang On! appeared on ITV's 'This Morning' with Phil and Fern. The appearance was such a success it was featured in This Morning's best bits of 2008. Click here to read more about their BGT experience, or to watch their performance on This Morning.

Alongside the performing Bang On! have also recorded an album and worked on recordings for the opening of Ferrari World in Abu Dhabi.

With the help of the wonderful Fool's Paradise agency, Bang On! are currently performing across the UK and Europe with their street show, theatre show and workshops for all ages. Check out the events page to see when they will be near you!

"Bang On! were a roaring success and held 1800 spellbound during our opening ceremony. They were both really friendly too." Sally Christmas, Girl Guide Camp, East Grinstead

"Bang On! are my kind of act" Amanda Holden

"Bang On! were absolutely fantastic when they visited Shooting Star House. The noise and atmosphere they generated was electric and the families really enjoyed the performance. Dave and Katie then had a jamming session with the children and it was a joy to see the excitement on all the children's faces." Adam Petrie, Head of PR and Communications, The Shooting Star Hospice

"Bang On! stole the show at the launch event for the Council's new bin collections service. They were the highlight of the day with an energetic performance which drew a huge crowd of shoppers to our marquee. They put a smile on everyone's face." Rachael Wharton, Waste Promotions Officer, Elmbridge Borough Council

"Thank you so very much for your fabulous performance and workshops at our school a couple of weeks ago. The kids really enjoyed it and wrote some fantastic stories about the whole day" Bronwyn Harrison, Teacher, The American School, London

"Wow, I saw you guys at Edinburgh Festival on the 27th... you were brill, I have never seen anything like it. My Mum and Dad are now complaining because I keep banging the bins hehe" Emma Brown from Essex, taken from our online guestbook

"We have employed Bang On! on several sale promotions as they are great for pulling in the crowds and always put on a stunning show" Mark Haynes, Store Manager, Debenhams 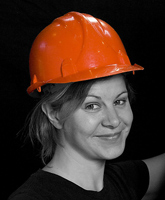 Katie is a classically trained drummer/percussionist who started playing the drums aged 11 and took up percussion a couple of years later. Having played in brass bands, concert bands, orchestras, rock bands and jazz bands she is an experienced performer and a keen composer who has written music for percussion groups, bands and orchestras.

Katie studied music at Brunel University where she received the Griffin prize for music. On leaving university she went travelling taking a drum with her. To support her travels she went busking in many cities across Australia and New Zealand and gigged in Byron Bay and Brisbane.

Since returning to the UK she has gained widespread teaching experience and has performed throughout the country with well known acts. She can be seen playing drum kit in the Jamie Cullum video for the single 'Mind trick' and recently performed with Robyn at Radio 1's Big One.

Apart from Bang On! Katie currently plays drum kit and sings in the rock duo Minus One, performs as a session musician, and teaches drum kit in south west London. 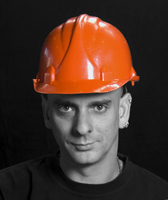 Dave started out playing the violin and achieved grade 8 by the age of 16. He then taught himself drums, and this led to getting involved with all sorts of bands. The buzz he got from drumming made him realise this was what he wanted to do, so he turned his main focus to drums and percussion.

Forsaking a promising career as a dustman, he went to university to study music, and has since performed with orchestras, djs, bands of various genres and in theatrical and performance art productions. Also an improviser and a composer, he finds that Bang On! perfectly combines the chance to be musically creative on a whole range of instruments whilst doing what he likes best, which is drumming on anything available.

As well as Bang On! Dave currently performs as a freelance musician, plays percussion for dance classes, and drum kit and fiddle for The Wessex Pistols.

Katie and Dave met at university when providing percussion for a physical theatre production of Boudicca. The show was taken to the Edinburgh fringe festival in 2001, and while there, they successfully experimented with busking on djembes (African drums). This inspired them to continue performing together when they returned to London, busking in town and city centres, performing at club nights and parties, and working with theatre companies and bands.

In their final year at university, Katie wrote a piece for five percussionists to play on unconventional instrumentation - two dustbins, two chairs and a watering can. The piece was very well received at many performances giving Katie the enthusiasm to expand the project. She approached Dave with the idea of a junk percussion duo and Bang On! was formed. 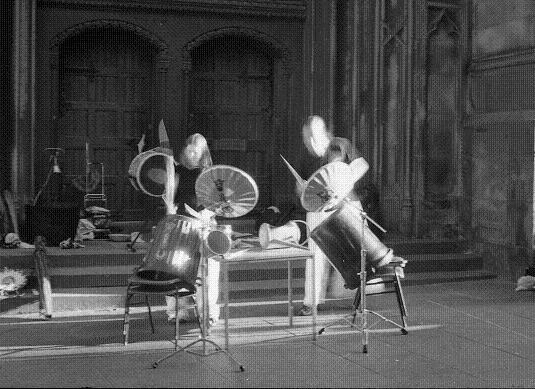 Edinburgh festival 2002. This time they went as Bang On!, taking with them a drum kit (consisting of a table, four chairs, a watering can and some random rubbish) as well as the djembes, for more variety. Again they were well received and were invited to play at an international youth festival in Taiwan.

Due to the difficulty of taking a table, two big dustbins, 4 chairs and a watering can in your hand luggage, Dave made a new travel friendly kit from aluminium scaffolding poles. The pair went to Taiwan and had an amazing two weeks performing, experiencing a totally different culture, getting their pictures in the national press, an interview in a music magazine, and being featured on the TV news and a documentary programme.

After this, Katie went travelling but returned just in time to go to the Edinburgh festival 2003. This time they had the new kit, new rubbish, and a vibrant new banner! 2003 was a very successful year and things have escalated from there. Since then Bang On! have performed in nightclubs from Edinburgh to London, at carnivals and festivals, put on workshops in schools, performed with dancers, musicians, and toured the UK and Europe with The Dresden Dolls.

In 2007 Bang On! took on their biggest challenge yet of taking a show to the Edinburgh Fringe festival. The Joy of Junk was a 50 minute explosion of sounds and visuals with many surprises and audience participation. The show received 5 star reviews and became a sell out!

Having been through many changes through the years the bin kit's most recent facelift happened in May 2006 with the addition of a 3rd water butt that Dave hooked up to act as a pedal-operated bass drum. As a result of this the bin kit currently consists of a frame made from aluminium scaffolding poles, 3 water butts for the bass sounds, and two metal bin lids that are used to create treble noise. This leaves plenty of space for tying on all sorts of objects that make different sounds, such as broken guitars, saucepans and a squeaky coat hanger, but as both performers have a tendency to break things the kit never stays the same for long! 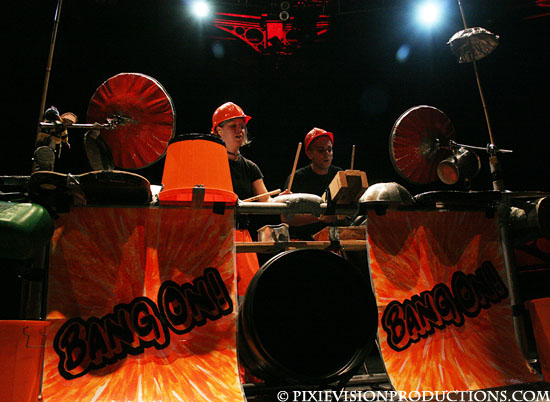 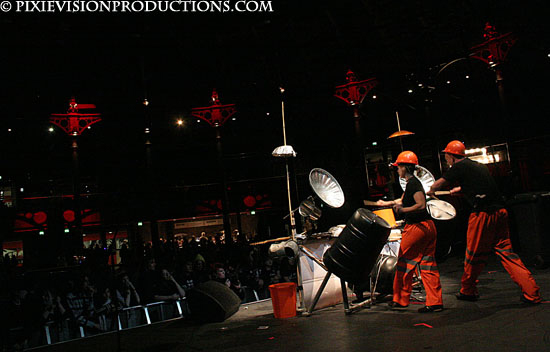